I have the immense pleasure to introduce my friend and colleague, Jennifer Wyatt, to the pages of Girl Tries Life. Jennifer is a lover of all things books and travel. She is my resident travel expert, and when I recently visited San Francisco, she was my guide to what to do and what not to. Nobody could have covered City Lights the way that Jen does. Take it away, Jen!

With the proliferation of big-box bookstores, online booksellers, and the popularity of e-books, independent bookstores are like salmon swimming upstream.  One of the finest independent bookstores in North America is City Lights Booksellers & Publishers in the North Beach district of San Francisco, California. City Lights was founded by writer and poet Lawrence Ferlinghetti and Peter D. Martin in 1953. The store was built on the premise of free intellectual inquiry, where readers, writers, artists and intellectuals could gather to foster that exchange, and it remains as current and avant-garde as it did then. 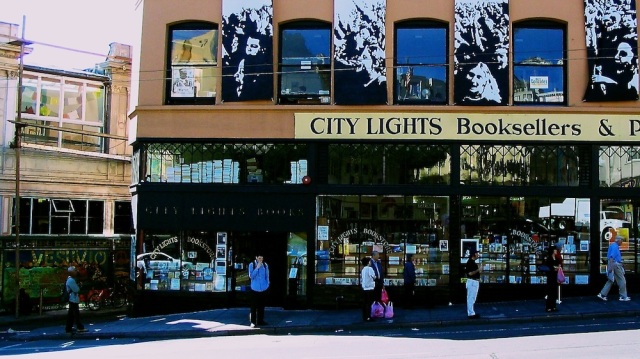 San Francisco is a city replete with history, and has been a backdrop to migrations, movements and events that have given the city an enduringly unique edge.  It’s easy to think that if there were room for freedom of expression -even dissent- anywhere, surely it would be in San Francisco. In the late 1940’s, the San Francisco poetry and literary scene was active and gaining momentum through the San Francisco Renaissance. When the poets and writers of the Beat Generation came to San Francisco in the early 1950’s bringing their brand of philosophy, religion and counterculture, writers like Jack Kerouac, Neal Cassady and Allen Ginsberg pushed the boundaries of their social norms. A hallmark of the Beat Generation was freedom: freedom of movement, freedom of thought, freedom of religion, freedom from materialism, freedom of expression, philosophical freedom, artistic freedom. But that freedom ran against the grain of what mainstream society deemed appropriate.

During this time, Lawrence Ferlinghetti’s commitment to free intellectual inquiry was solidified when he founded City Lights Publishers in 1955 and launched the Pocket Poets Series. Operating in a prevailing environment of conservatism and censorship, when Allen Ginsberg’s famous Howl & Other Poems was published as part of the Series, Feringhetti was arrested on obscenity charges. After a very public trial that garnered national attention, Ferlinghetti was acquitted in a precedent-setting First Amendment case that forever changed the publication of controversial literature in America. City Lights continues to publish progressive and provocative works, with over 200 titles in print. Poetry still finds a strong advocate here, but so do writers of alternative fiction, memoirs, political commentary and social activism.

As a bookstore, City Lights remains fully dedicated to its founding principles. Their shelves overflow with the unique, the original, the thought provoking and the hard-to-find. Allow yourself to get lost amongst the stacks, and you will discover authors and even genres that are new to you. While you may not find the current bestsellers available at your average retailer, you will certainly find something interesting, something surprising and something irresistible.

Literature is a broad enough term here to include an outstanding collection of the classic, the Beat and the modern. Non-fiction is here too, from critical essays to history and gender studies. Let exploration of art and architecture carry you into dada and surrealism, and then continue on into the world of film, music and theatre. Delve into the sciences, whether political or natural, with everything from the physical sciences to psychology to anthropology. Expand your mind with a thought-provoking assortment of books on philosophy and spirituality. Then expand your borders through the travel section. If you’re looking for other worlds, the science fiction and fantasy sections will take you there. For the writers among you, you will find resources here as well. And of course, you will find poetry, even that of Lawrence Ferlinghetti himself, who at age 94 is still an active writer and activist.

It will take a while to decide on how many books to buy, but once you have made your purchase, walk across Jack Kerouac Alley to the equally historic bar Vesuvio, a San Francisco institution of jazz, poetry and art. Since 1948, Vesuvio has played host to poets, writers, singers and actors; characters and personalities of all description; the famous and the infamous; and ordinary mortals like you and I. The clientele is as varied as the books at City Lights, so find a corner, order a drink, open the front cover of one of your books, and settle into the vibe of independent literary Americana at its best.

View all posts by admin →

Review: Kiss Me In The Rain by Sarah Kades
Professional Development for Aspiring Authors

This site uses Akismet to reduce spam. Learn how your comment data is processed.